Can I get an oh yeah?

Oh yeah? Hi everyone! So for my first blog post I am going to take you on an adventure that I had this past weekend. One thing you need to know about me is that I love concerts…like seriously love concerts. Live music is something that gives me so much joy and I have made some of the best friends I have from going to shows. This past weekend I went to a total of three sleeping with sirens concerts! If you haven’t heard of the band I highly recommend them, and they have an album coming out September 22nd if you are interested.

To give a little background, I have seen Sleeping with Sirens three times before this weekend, and at the show in Boston last year I met Sofie, who flew all the way from Belgium to go to the show! We kept in close contact after that (she even sent me some Belgian chocolate!) and it ended up working out that she could fly to California for these shows. But ok enough of the background…onto the shows!

(here is a picture of Sofie and me at the Boston show last year!)

The first show was at the Troubadour in West Hollywood. I had never been to this venue before, but its very small, meaning that the show was very up close and personal with the band. The actual show was absolutely amazing and probably the best show I’ve ever been to, but the waiting outside all day was miserable. For shows I tend to get there early so that I am in the very front, Sofie is the same way so it works out really well. Its just that it was 106 degrees outside and there was no shade that wasn’t fun. To get onto the show, I am honestly still speechless about a lot that happened there, but all I do have to say is that I love this band and the people I was with and they made it one of the best nights of my life. That concert experience might even be the best I will ever have because of the atmosphere and the people I was around who were just as excited as I was, and were even willing to enthusiastically dance around!

(This is not zoomed in at all!! Its crazy how close I was!!)

Ok moving onto Saturday in beautiful San Diego (my hometown). Again it was over 100 degrees outside, but at least there was shade when I was there waiting. Then a crazy thing happened, myself, Sofie, and my friend Mel, decided to go buy onesies from Target and wear them to the show…now if you have never been to a GA show, this is a bad idea, like a really bad one. The pit is just people all packed together trying to get as close to the stage as possible. Long story short, this means it gets hot and since it was 100 degrees outside, it was even warmer inside. Basically the exact weather you do not wear onesies in… But we did it anyways! In the end, none of us passed out and it was totally worth it. 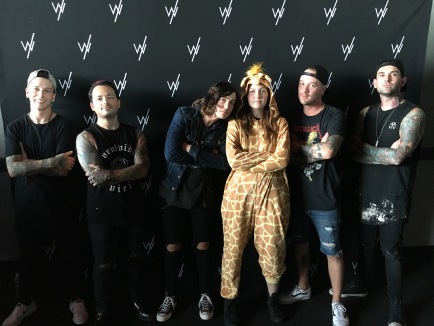 Here is my m&g picture with the band! I asked them if they could do a serious pose.

Still very close to the band!

Here I am after I survived the show with Gabe, the drummer from the band!

Onto the last show, an acoustic set and signing in Long Beach! The big group I was with for the Los Angeles show was reunited once again! We again got there early enough that we were at the front of the line and ended up being front and center for the acoustic show! But the best part of the day was after the show was over when we were sitting around waiting for the signing. The record store started to play the new singles from the speaker system and we all started to dance. This caught the attention of a little boy named Danny with down syndrome who was also at the San Diego show and was a huge fan. He joined in with us dancing around the store to the new songs. You could see the joy on his face and everyone was having so much fun it really shows how important music is to so many people and how it brings us together.

So that was a brief overview of the little adventure I went on this weekend! More pictures below! Let me know what you think and leave a comment or like the post below! See you guys next week!

Credit to SaraSaysPhotography for the high quality pictures from the show!

This was the final ‘Oh Yeah’

Hi! My name is Megan and I am a 3rd year History major at Northeastern! I am currently completing my very first co-op at Brave New Films, a social justice, documentary filmmaking nonprofit in Los Angeles. Follow this blog to hear about my adventures in Los Angeles and the surrounding area!

What I’m Listening To