“landing on a runway in Chicago” -Homesick at Space Camp

If anyone was wondering just how ‘ride or die’ I am for Fall Out Boy, I flew to Chicago to see them, got in line at 4am for balcony seats, then saw them again at Jimmy Kimmel and got in line at 5am for a six song set after getting in from Chicago just the night before. Anyways, if you didn’t know Fall Out Boy was my favorite band, you definitely do now. But yes this weekend I got to explore a bit of Chicago and see my favorite band play a small hometown show. To make this easier I am going to split this up by days:

I took a 6am flight from LAX to O’Hare (if any of you get the reference please leave a comment because we need to be friends) and landed in Chicago around noon. This was the first time that I was traveling completely alone for a whole weekend in a city I had never been in, so I was extremely excited to get out of the airport and into the city. I started out by going straight to Wrigley Field, unknowingly just as a Cubs game was about to start. It was really cool to see all of the fans all around the stadium, but sadly I did not have time to stay and watch a whole game. From Wrigley I walked to Pick Me Up Cafe, which is the best restaurant I have ever been to in my life! For those who are not crazy Fall Out Boy fans, Pick Me Up Cafe has some importance to the band. It’s where they took the picture for the cover of their first album! Funny story is that the waiter asked why I was in Chicago and I told him I was in town for the Fall Out Boy show and he pointed out which booth it was where the picture was taken. He even took a picture of me sitting there! While I was eating I also got to meet up with some friends I have who were also going to the show. Since the staff knew we were all Fall Out Boy fans, they played their acoustic album from the house speakers just for us! After eating an enormous plate of eggs benedict (which they serve all day and all night) I headed out to go on a quick shopping trip. The best stop was Belmont Army which started as a military supply store and expanded into a 5 story store with different stores on each of the levels. The most interesting level was the vintage floor, which was basically a huge thrift store with extremely low prices! Luckily I was able to hold off on buying too many things. After this shopping trip I headed over to Millennium Park to do some sightseeing. I happened to end up there right before sunset so the lighting was amazing for a lot of the pictures I took! After this I had one last stop at Reckless Records, where it was sooooo hard not to spend all of the money I had on records! Here are some pictures below: 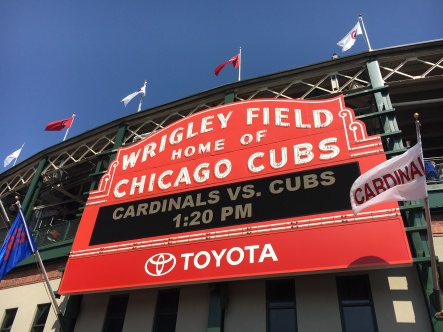 Of course I took a picture of the sign! 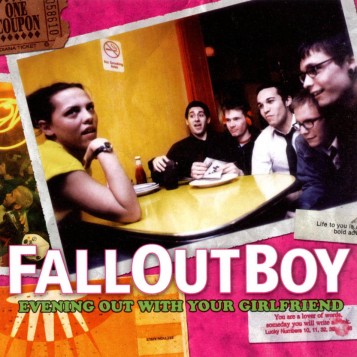 I had to go to the bean…

and take one of those awkward selfies too!

So this was the day of the show! The whole reason of why I went to Chicago! The way tickets were sold for the show, you had to sign up for ticketmaster verified fan and if you got a code, then you got a chance to get tickets. So I did not end up getting tickets but my friend was able to snag a pair of balcony tickets right before they sold out and offered me the second ticket! The show was at the Chicago House of Blues, and how the venue works is that in the balcony if you are more than 2 or 3 rows back, you can’t actually see anything. Because of this, my friends and I decided to get in line super early just to make sure we were in the front and had a good view, meaning we were in line, coffees in hand, at 4:30am. Waiting in line for 15 hours wasn’t actually as bad as it could have been. All of the people in line around me were extremely nice so we all got to know each other really well! And now I have some friends who offered to show me around Chicago the next time I am in town! Now onto the show…so magically somehow in the confusion of being the first few people being let into the venue, my friend Farah and I accidentally got lead up the stairs that lead to the pit and not the stairs that lead to the balcony. This means that Farah and I were able to both get really good spots at barricade as close to the stage as you can get! There was no opener for this show, as it was supposed to be a record release show, but the band decided to postpone the album until January so that they could get better quality songs written and recorded. After waiting inside for an hour and a half, it was time for Fall Out Boy! Their set was absolutely amazing and it was definitely the best show I have ever been to! They debuted a new song called ‘The LAst of the Real Ones’ (which I do recommend you listen to) and they also played a song called “Chicago is so Two Years Ago’ which they almost never play live unless they are in Chicago! That song also happens to be my favorite off of their second album so it was amazing to get the opportunity to hear it live! In addition to being able to sing along to a lot of my favorite Fall Out Boy songs, I also caught a guitar pick! The whole band seemed really excited and happy to be playing the show, and even though there were a few forgotten lyrics, they seemed to have a great time! 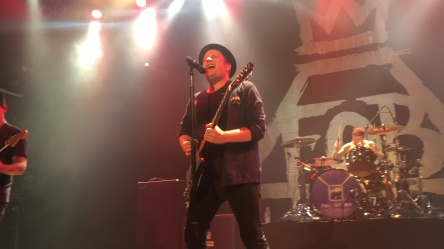 Here is Patrick the lead singer!

See if you can spot me! Hint: I am just to the left of Pete’s head, who is the band member furthest to the left

I’m going to skip Sunday because all that happened was I flew back to LA and then had to work at night.

On Monday, Fall Out Boy played a short set for Jimmy Kimmel, including a TV debut of the song they had just played before in Chicago! Since Fall Out Boy is the best thing to ever happen to my life, I decided to get in line early again, just to be sure I was going to be as close to the stage as possible. After a 12 hour wait, the show finally started! Again, I was able to meet some really nice people in line, so the wait wasn’t that bad at all! For the first two songs the band played, we were not allowed to have our phones out, because they were filming the performance and did not want the cell phones to distract. But for the other 4 songs, we could record anything we wanted to, so I was able to snag a few really cool pictures (thank you for TV lighting) Luckily enough I was able to catch another guitar pick at this performance as well! After the mini concert was over, I was so tired from all of the weekend’s activities that I went straight to my apartment and slept for 12 hours straight (with a brief interruption from a 3.1 magnitude earthquake). That’s it for this post so until next week enjoy even more pictures of Fall Out Boy below! 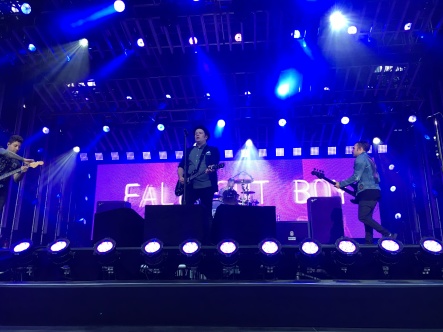 Here is Pete, giving one of his inspirational speeches

Patrick is doing his thing, while I finally got a good picture of Joe and even Andy behind the drums!

Hi! My name is Megan and I am a 3rd year History major at Northeastern! I am currently completing my very first co-op at Brave New Films, a social justice, documentary filmmaking nonprofit in Los Angeles. Follow this blog to hear about my adventures in Los Angeles and the surrounding area!

What I’m Listening To